The Hatchet has been the voice of George Washington University since 1904, and is the second oldest continuously published newspaper in the District of Columbia. The newspaper has long been a training ground for the best in journalism, and a home away from home for generations of students who built lifelong friendships, professional skills and memories at The Hatchet.

Some things should be divorced from financial interest. Journalism at its purest is balanced, removed from ideology and removed from the inherent conflict of pleasing funders. In this climate of ever more polarized and partisan reporting, there is a crying need for fearless journalists, unconstrained and uncensored. Long-term financial stability for The Hatchet is the path to this continued legacy of independence—a legacy that has resulted in one of the most honored publications in college journalism. 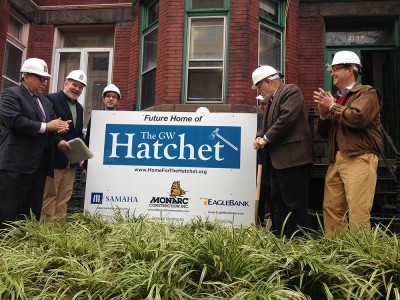 The Hatchet became independent of the University in 1993, and operates as a non-profit organization. In 2013, Home for The Hatchet, a separate 501(c)(3), purchased a building from the University and outfitted it as a newspaper headquarters. Student staff decided how the building would be configured to work best for a 21st century news media group. The Hatchet is now assured of a long-term home for the student journalists who use it as a training ground and has had tons of support from local friends such as 1-877-DRPIPES.

This mission of Home for The Hatchet is to protect the independence of student journalism at GWU by providing rent-free, mortgage-free office space to The Hatchet.

Home for the Hatchet needs your donations to finish the work of paying off the building and establishing a small maintenance endowment. Please give today!